After 20 years of working for another trash company, Gary Schneider decided to venture out on his own. Shortly after starting a lugger container company, Gary knew he wanted to pursue the residential market. To say his wife Karen was reluctant would be an understatement. She had actually thrown away all the paperwork they needed to get established in the residential market! Yet Gary was determined and prepared a mailing that was slated to hit 8000 households. Karen was petrified and asked God to give her some sort of sign, even a phone call with no-one on the other end. Within 90 seconds the phone rang. A customer number came up on the caller ID, but there was no one on the other end. God had talked to her! And the rest is…well…history!

So why did Gary & Karen Schneider name their new company Grace Hauling? As Karen says, “We could have called it Gary & Karen Hauling or G&K Hauling, but it’s called Grace Hauling because it is by God’s grace that we have this company. It was a gift from God, not something we deserved. It was by grace, period. It was nothing we did!” 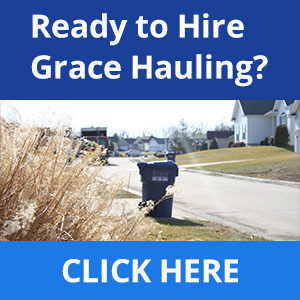